"Fort Raigad is much more than a mere tourist spot. It is a sacred place of pilgrimage, which has left an imprint of the grand vision of HindaviSwarajya as cherished by Chhatrapati Shivaji Maharaj."

Fort Raigad was the capital of the most illustrious Maratha sovereign, nurtured by Chhatrapati Shivaji Maharaj. It is a monument of his prophetic vision of HindaviSwarajya.

It has been described by European historians as'The Gibraltar of the East'. Various landmarks have lent it the credo of 'Shivtirth'. The holy shrine has become vibrant by the valour, courage and patriotism of Chhatrapati Shivaji Maharaj.

The sheer vertical rock face tearing into the sky aboveappears defiant and insurmountable. It has stemmed many a foreign aggression and protected the HindaviSwarajya during those historic times.

When he first saw the place, Shivaji Maharaj could not help exclaim:

“This Fort is formidable. All sides appear as if chiselled from a mountain of solid rock. Not even a blade of grass grows on the sheer vertical rock. This is a paragon to house the throne”

Wish you a happy and fruitful excursion around the fort!

At the foothills near village Pachad, is Chit Darwaja, also known as Jit Darwaja. After gruelling foot-slogging, you reach Khoob Ladha Buruj. It is a strategically located turret, from where an aggressor attacking from either flank could be repelled Nearly a mile ahead, after a difficult climb comes the Maha Darwaja. Built over 350 years ago, this main entrance to the Fort stands majestically. It is as imposing and stout today, as it was then! The design of this Maha Darwaja is an enigma. It defies detection of its location to the attacker. Blind curves enroute make it impossible for the attacker to use elephants to knock it down. In the battle of those historic times, elephants were used to demolish fort entrances. 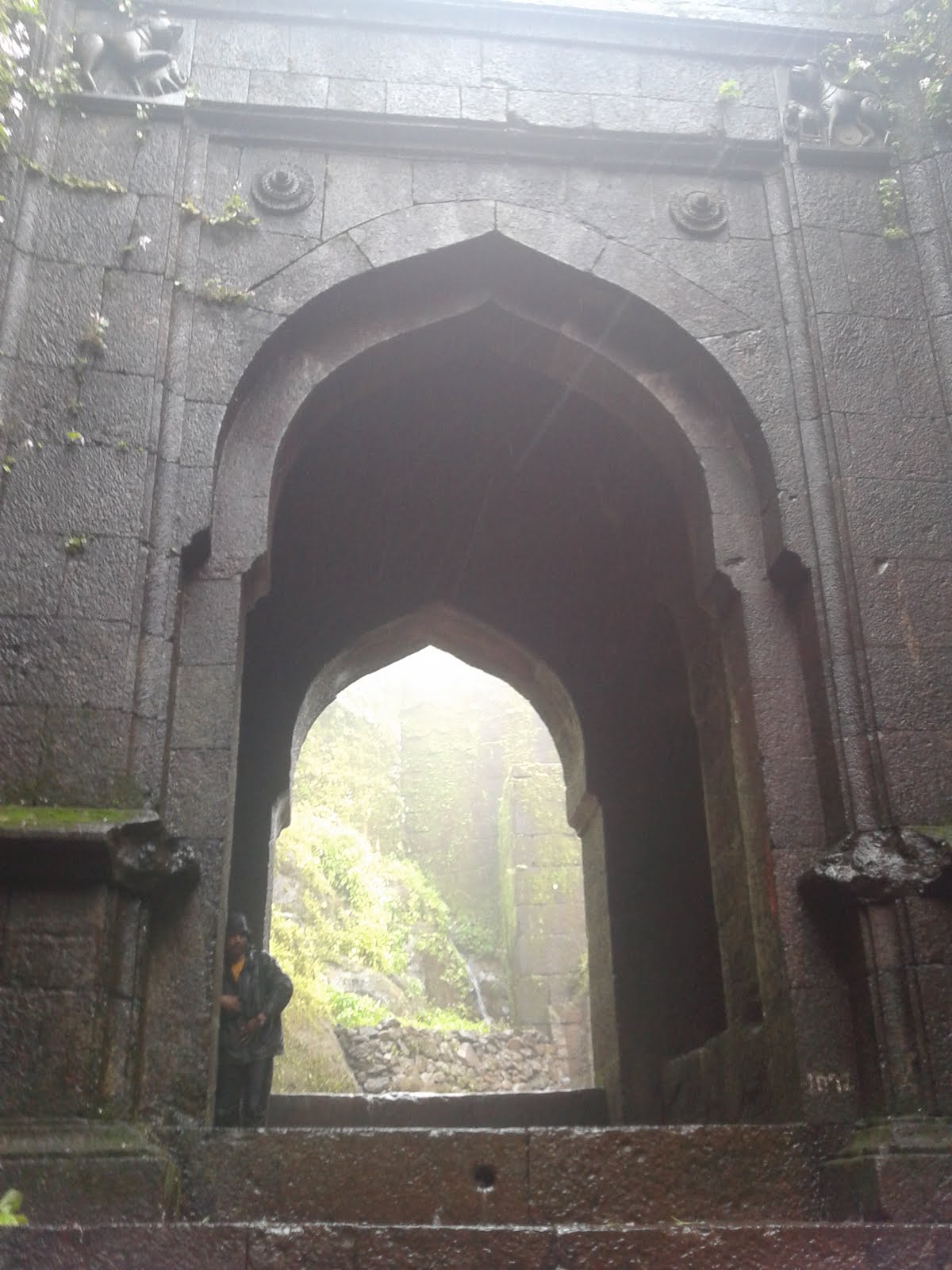 A steep climb of nearly 1450 steps and three and a half hours of extreme demands on your physical stamina, leaves you too exhausted. The magic mantra - Raigad Ropeway - has opened a new chapter of sightseeing - the Fort Raigad. It whisks you to the top, through the clouds and whistling winds, in just 4 minutes. Gone is its exhausting inaccessibility. Now you have all the energy and time to enjoy the sightseeing! Well-trained and courteous guides are at hand to give you a conducted tour of the Fort.

The Ropeway lands you at the top of the fort near Mena Darwaja. This was the special entrance for the royal ladies and the queens. To the left of Mena Darwaja is the Rani Vasa or “Queens’ Chambers”. They are six in number and were being used by the mother of Shiv Chhatrapati – Jeeja Mata, Soyarabai, Putalabai and other royal ladies. 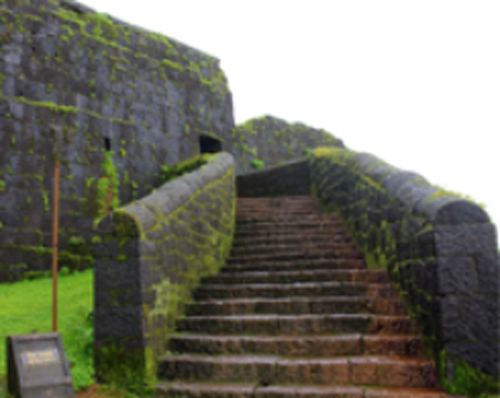 The Ropeway lands you at the top of the fort near Mena Darwaja. This was the special entrance for the royal ladies and the queens. To the left of Mena Darwaja is the Rani Vasa or “Queens’ Chambers”. They are six in number and were being used by the mother of Shiv Chhatrapati – Jeeja Mata, Soyarabai, Putalabai and other royal ladies. 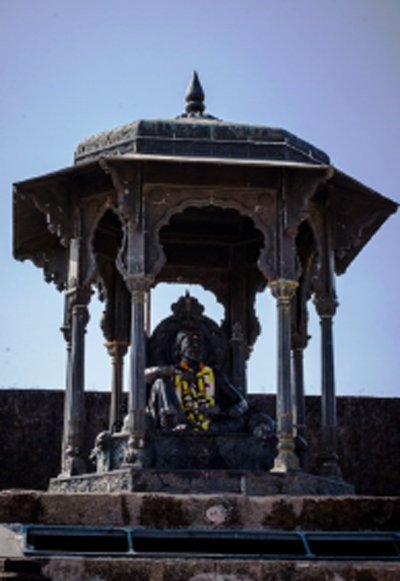 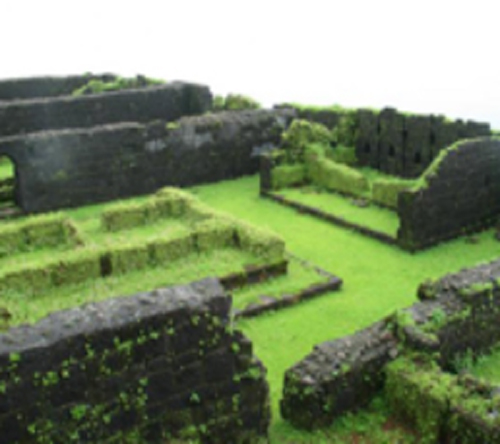 To the right of the granaries is the palace of Shivaji Maharaj. It is called the Raj Bhavan, where he dispensed justice in petty and routine matters. The palace rests on a double plinth and had wooden columns to support the palatial structure. The Raj Bhavan is a mute witness to the joys, sorrows, anger, victories and overwhelming generosity of Shiv Chhatrapati. The plinth adjoining Raj Bhavan, holds two large water tanks and by its side, is the location of the Royal Bath. Excellent toilet and drainage system highlights the structural design of that era. To the east of Raj Bhavan is in an open space, there is an underground cellar. It was used for secret dialogues, worshipping Bhavani Mata and for storing war booty after the raid on Surat. 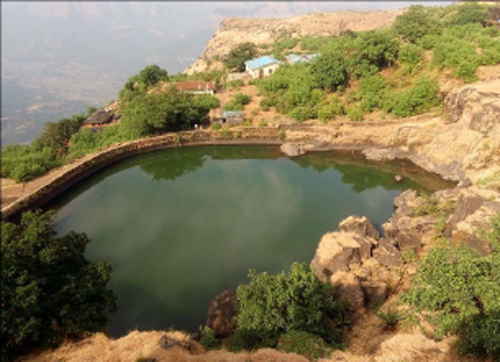 The fort has many huge water reservoirs, one of which is the picturesque Ganga Sagar. Two main entrances from the Royal Palace open in to a sprawling lawn. This is the Raj Sabha. It has witnessed the splendour of the glorious coronation of Shiv Chhatrapati. The shackles of 300 years of slavery were broken and Shivaji Maharaj proclaimed establishment of Hindavi Swarajya! The magnificent throne, studded with diamonds and gold, rested on eight columns of pure gold weighing almost 1000 kilos. It also bears the royal emblem of Shivaji Maharaj. The umbrella over the throne was adorned with strings of precious stones and pearls. 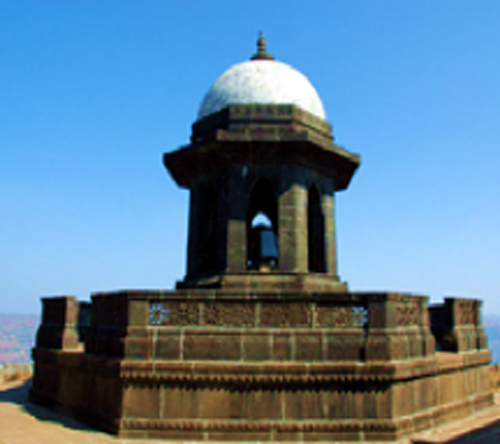 Entry for common public to Raj Sabha was through the Nagarkhana. In those times, the royal band played here round the clock. It is an excellent example of architecture and miraculous acoustics. The distance between 'Nagarkhana and the Royal Throne is more than 200 feet, yet even the slightest whisper can be heard from both ends very clearly. 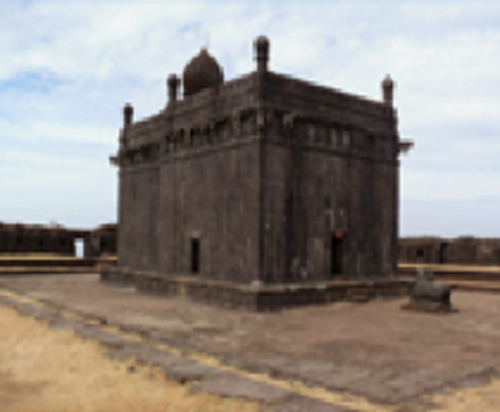 Holi Cha Mal, is outside the Nagarkhana. It is a wide open ground, used for annual Holi festival. There is a temple of Shirkai Bhavani, a presiding deity of the Fort. In front of Holi Cha Mal, there is a spacious and well laid-out marketplace. It is built on a high plinth and is separated by the Jagadishwar Temple. Adjacent to this temple, is the most revered place on Fort Raigad, the Samadhi of Shiv Chhatrapati. The Samadhi is intact and well-maintained, even today, due to the personal initiative of Lokmanya Bal Gangadhar Tilak. 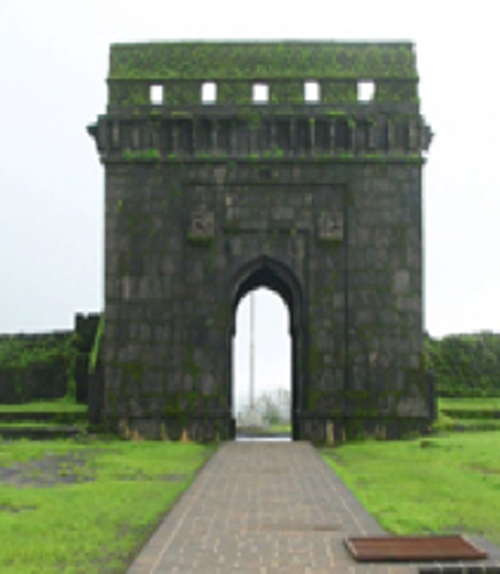 Other places of interest are ammunition depot, Bara Tanki i.e. more than a dozen huge water reservoirs, Rameshwar Mandir, Wagh Darwaja, Takmak Tok - an execution place for the proclaimed criminals, etc. These are testimony to the valour, courage and ultimate sacrifice of Maratha soldiers, who made Hindavi Swarajya a reality. 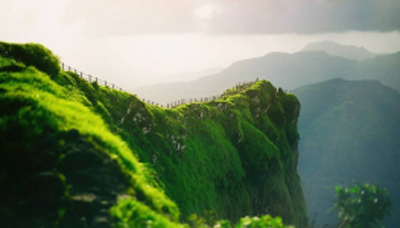